The City of Albany has a deep, historical connection to the Willamette and Calapooia Rivers. The confluence was significant to the native Kalapuya peoples and to early European settlers who eventually built the city at this unique intersection of rivers, roads, and railroads.

Today, the riverfront is separated from downtown Albany by parking lots, Water Avenue, railroad tracks, and missing sidewalks and crossing options. The connection between downtown Albany and its waterfront has become largely hidden by thick foliage and poor water access.

Over time, the City has been taking steps to reestablish downtown Albany’s connection with its rivers. In recent years, the City has been preserving waterfront properties for public use, using the Central Albany Revitalization Area to make strategic investments in downtown, and planning improvements to Water Avenue and the waterfront parks.

Now the City is taking the next steps in this long-standing effort to improve Albany’s waterfront and how it connects to downtown. The expectation is that new waterfront redevelopment will ultimately create one of the most unique downtowns in the state of Oregon. When complete, the riverfront will be a major downtown anchor, connecting the community to the river to which it was historically connected. 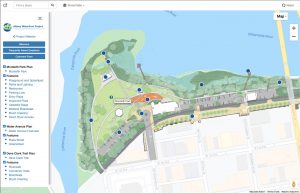 We strive to make our events accessible to all, and special accomodations can be made by advance request. Please contact the City at 541-917-7500 or for more information.